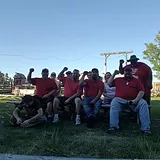 ​The first owner of the Rocking B Ranch was Mr. Joseph Humphreys, who came to the area in 1908.

Mr. Humphreys and his wife established a farm on the property, and built a cabin. They later built a big house for his family, and the cabin became a bunkhouse for travelers. Mrs. Humphreys was famous for her apple pie.

The Humphreys sold the property in 1960 to the Dinnison family. Mr. Dinnison tore down all the out buildings and built one large barn in 1966, where they kelp 50 horses — from Sheltons to American saddle bred horses. Mr. And Mrs. Dinnison divorced in 1966 and the property changed hands a few times afterward.

Scott and Pamela Brownlee bought the property in 1992. The Brownlees met at the Dick Grove Music School near Los Angeles Ca in 1979, and had married in 1981 Pamela worked as a backup singer for various recording artists, and Scott operated a recording studio where he was among the first digital audio recorders in the country

The Brownlees turned the ranch into one of the areas favorite destinations for residents and tourists.

In 1993 they hosted the ranch’s first barn concert, which attracted 500 guests – mostly friends and members of their church. Later concerts were such a hit that they opened it up to the public in 1995 as The Rockin’ B Ranch Cowboy Supper Show. 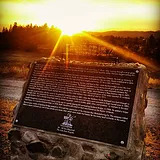 Imagine yourself floating down the Spokane River from the head waters of the Coeur d’Alene River. After passing through the gorge at Post Falls the river widens and you meander through the Spokane valley. Pioneers began settling this area in the 1850s.

The first pioneer, Antoine Plante, arrived in 1852. Plante married an Indian woman and had three children. He took up farming in the summer and trapping in the winter to provide for his family.

The first bridge to cross the Spokane River was built here in 1864 by three partners – Joe Herring, Tim Lee, and Ned Jordan. The fee to cross the wooden trestle was a $1.00, and the bridge provided an opportunity for people and equipment to go into the gold and silver mines of Idaho, Montana, and British Columbia. Jim Lee was the first post master of Spokane Bridge, which became a pony express stop in 1871, between The Dalles, Oregon Territory and Missoula, Montana Territory.

In 1881 the Northern Pacific Railroad arrived in Spokane Falls, which later became Spokane. Railroad tracks were not extended to the Puget Sound area till 1893 giving the Spokane a ten year head start on delivering goods — such as lumber, gold, silver, and produce — to markets in the east.

Over the years many business came and went in the area, one of which was the Cranston Box Manufacturing Co. Built in 1913, the box company filled, on average, a dozen railroad cars full of box shooks per week. These were thin wide boards for building fruit boxes.